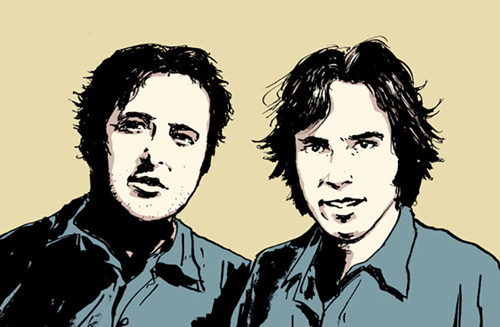 Tom Scharpling is one half of the renowned comedy duo Scharpling & Wurster. S&W ranked #31 on ROLLING STONE’S list of the Fifty Funniest People. Tom writes for television and is currently developing a show for Amazon, which is not actually television but is kind of like television. He has also been directing music videos – he was named Video Music Director of 2012 by SPIN his video for Aimee Mann’s “Labrador” was named #2 Music Video of the Year (after “Gangham Style”). He is currently directing commercials and developing a few things that will hopefully excite you through 2014 and beyond!

Jon Wurster is…um…the other half of the renowned comedy duo Scharpling & Wurster, who have been…ah, forget it. Jon has been the drummer for indie-rock pioneers Superchunk since 1991. He’s also the drummer in The Mountain Goats and The Bob Mould Band. When he’s not making records or touring the world Jon lends his writing talents to the Adult Swim programs “Squidbillies” and “Your Pretty Face Is Going To Hell” and appearing in videos by today’s hottest musical acts like as Aimee Mann, J. Mascis, The New Pornographers and The Postal Service.